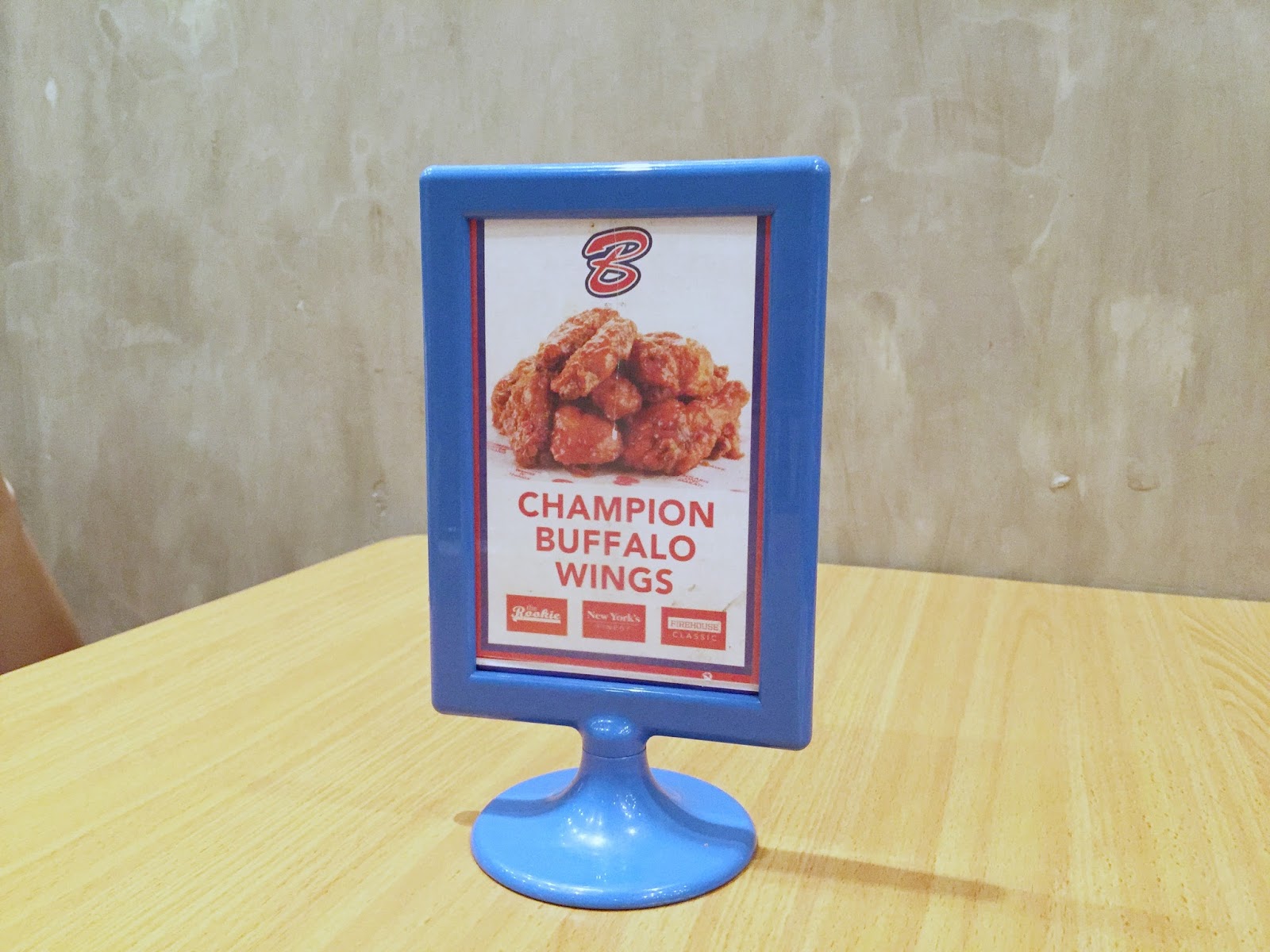 Boyfriend has developed an addiction with chicken wings a few months back. It all started with Shakeys’ Chicken Wings then to Yellow Cab’s chicken wings. The next thing I knew he already knew how to cook it on his own but it still doesn’t stop him from trying out chicken wings from different restaurants. We’ve been eating chicken wings way too much that my sister has come up with a joke that we will soon grow our own wings because of it. lol. But yeah, we recently tried out Buffalo Wings N Things too! Haha!

So our next stop for our chicken wings adventure is Buffalo Wings ‘N’ Things at SM Mall of Asia. They have a huge variety of chicken wings flavors and we want to try as many as we could so we settled on the Triple Sampler. We chose the flavors Garlic Parmesan, Honey Barbecue, and The Rookie.

This is our least favorite among the three, it doesn’t really have a distinct taste for it to stand out. It’s just plain salty.

I’d say Honey BBQ is okay. It’s like a crispy chicken barbecue if that makes sense. lol. This is my sister’s favorite.

The rookie is definitely our favorite. It has the right amount of hotness into it. It’s such a great balance that won’t overwhelm a kid’s palate. My sister loved it too so I’d say this one is kid friendly. Boyfriend and I know though that we should’ve ordered the spicier one. 😉

I’d say Chick ‘N’ Quesadilla is a MUST order whenever you eat at Buffalo Wings N Things. It has chunks of chicken, lots of cheese and is not too spicy. I finished all of this and didn’t even share with anyone. Yup, it’s that good! You gotta eat it right away though since it gets soggy after a while because it has lots of cheese.

We wanted to order plain rice originally but they don’t offer plain rice at Buffalo Wings N Things which is such a bummer. We had no choice but to settle with their NY Dirty rice. My boyfriend and my sister is NOT pleased because it has a strong cumin flavor and they both hate cumin. Emphasis on the word hate, they hate cumin with a passion.

After we asked for our bill, they gave us free mochi ice cream which is a great surprise because we didn’t really order any desserts as we don’t have any room for it anymore. Anyhoo, we still managed to devour their Chocolate Mochi Ice Cream. It’s so good!

So are we ever coming back to Buffalo Wings N Things? Of course we will! I’m actually craving for the Chick ‘N’ Quesadilla as I’m writing this post. We would love to try other flavors of their chicken wings too. They have more than 10 flavors if I remember it correctly. 🙂

Anyway, I hope you like this post and if you have any restaurant suggestions, just drop it on the comment box below. We’re always on the look out for new restaurants to try! 🙂